THE MIOCENE/PLEISTOCENE CONTACT
IN THE COLUMBIA BASIN: TIME IMPLICATIONS

Many so-called time gaps exist in the geologic record. Some of these time gaps show little erosion, even though many millions of years are said to have elapsed between the laying down of the lower bed and the deposition of the upper stratum. Roth (1988) has commented on the significance of this phenomenon. The geology in this part of Eastern Washington State seemed suitable for a close examination of one of these gaps, even though the time gap is not as great as has been seen at some other locations. The gap exists between the uppermost deposit of Miocene Columbia River Basalt and the Pleistocene Palouse loess that overlies it. The bed below the gap was laid down as molten lava. If no long period of gradual deposition was involved, the contact should be sharp, unless eroded. Another factor favoring this study was the great difference between the two beds — one being hard, dark volcanic material and the other being light, soft loess of sedimentary origin.

The area studied is a plateau that lies in Washington State between Walla Walla on the south and Spokane on the north, and between the Idaho border on the east and U.S. Highway 395 on the west (Figure 1).

The topography of most of this area is rolling hills that are the result of the warping and doming of the basalt, and several canyons that cut deep into the plateau. The elevation gradually drops from about 850 m on the east to around 150 m on the west. Several topographic highs on the east side are composed of the Precambrian granites that underlie the basalt. The best-known of these are Steptoe Butte (front cover photo) and Kamiak Butte, 1101 m and 1110 m high respectively.

Mantled over the basalt (but not on the steep granite buttes) is a thick layer of fine sediment considered to be wind-blown glacial silt (Busacca 2001). The silt feathers out toward the north and west and disappears among the forested foothills of the Rocky Mountains of Idaho. Except along the edges, it provides an excellent soil up to 5 m deep that is utilized for both dry wheat farming and irrigated crops.

The Missoula Flood (sometimes called the Bretz Flood, or the Spokane Flood) that resulted from the breaking of an ice dam that produced huge Lake Missoula in the intermountain valleys of Northern Idaho and Western Montana removed the loess from long northeastsouthwest trending tracts and scoured out deep canyons in the underlying basalt (Orr, Orr and Baldwin 1992).

Many flows of lava (over 300) that arose from fissure eruptions in Southeastern Washington, Northeastern Oregon and adjacent Idaho were laid down in the Columbia Basin before the deposition of the loess (Tolan et al. 1989). These eruptions are interpreted to have commenced around 17 million years ago. Nine-tenths or more of the total lava had been ejected by 14 million years (Tolan et al. 1989). Three major suites of basalt, the Saddle Mountains, Wanapum, and Grande Ronde (Reidel 1983) make up the basalt beds of the research area. The uppermost basalt bed at all the 27 sites examined and sampled was within the Wanapum basalt group. (See Table 1 for details for each site.) All site samples are located in basalt that has been radiometrically dated at 15.3 to 14.5 million years old.

In this research area, 27 satisfactory exposures of the Miocene/ Pleistocene contact in road cuts and quarries were located during searches along approximately 2400 km of highways and country roads.

The following criteria were established for each site: 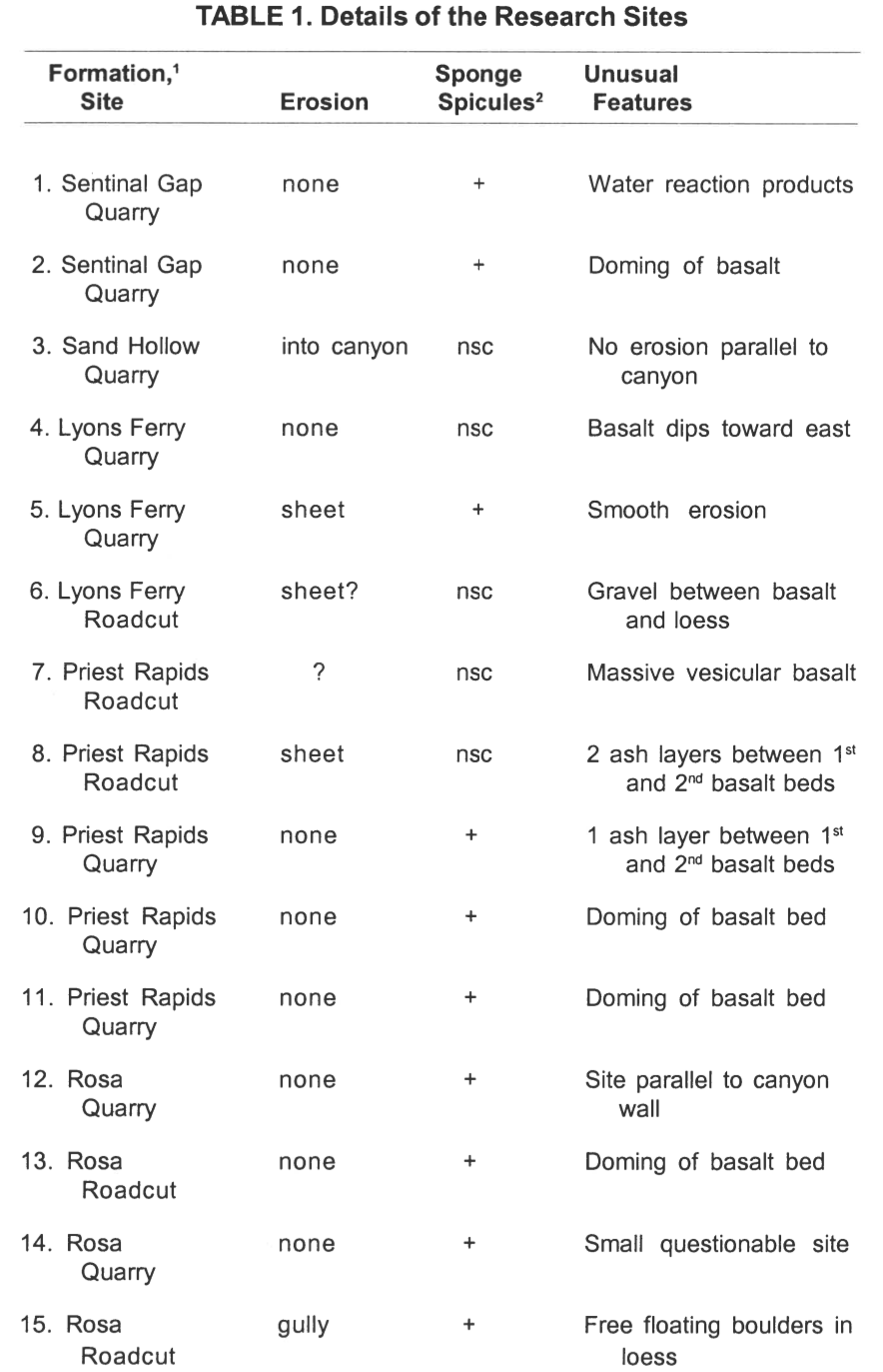 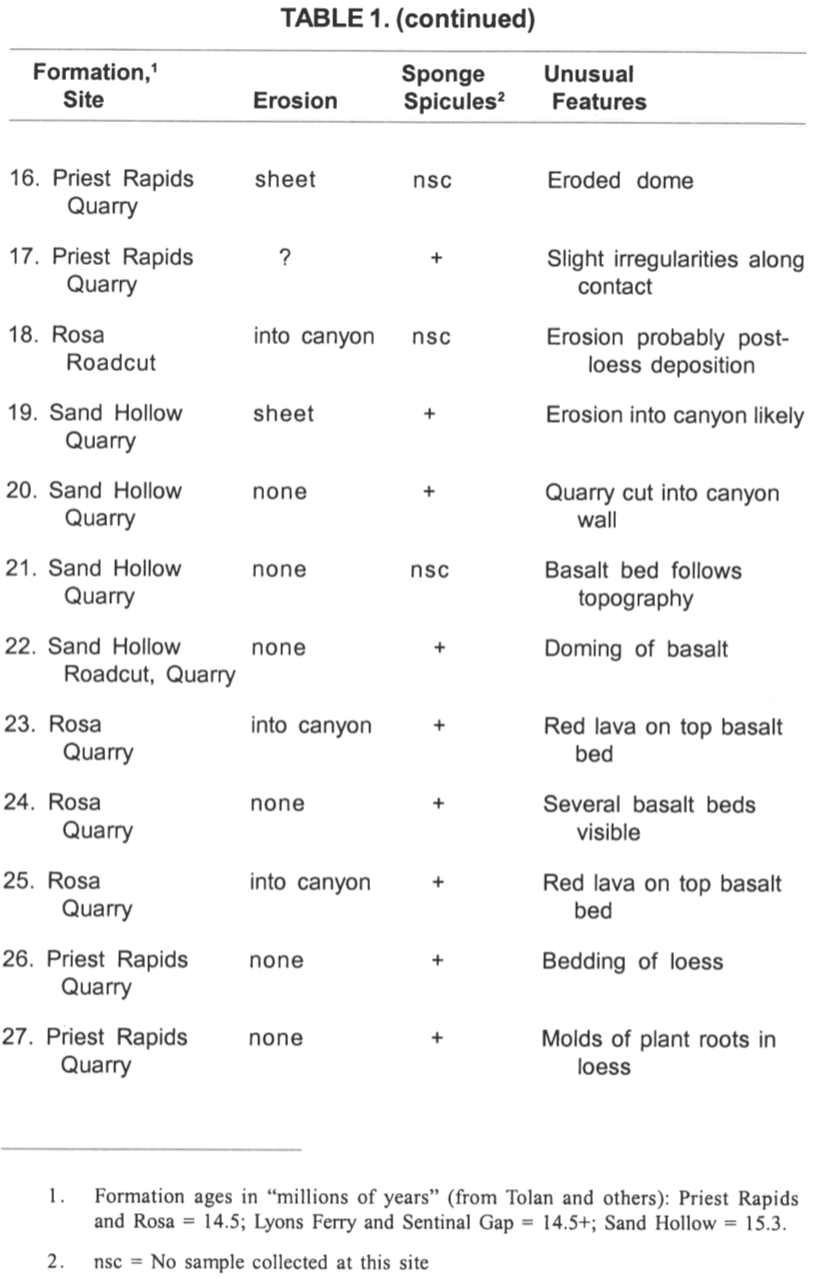 Table 2 illustrates the data sought for each site. Twenty-two loess samples were collected. Loess was not collected at several sites for two reasons. A deep irrigation ditch prevented close access to one site. The loess of several sites with high vertical cliffs could not be reached either from the bottom or the top. When collected, the sample was taken from just above the contact, not from the ground surface at the top of the cliff. 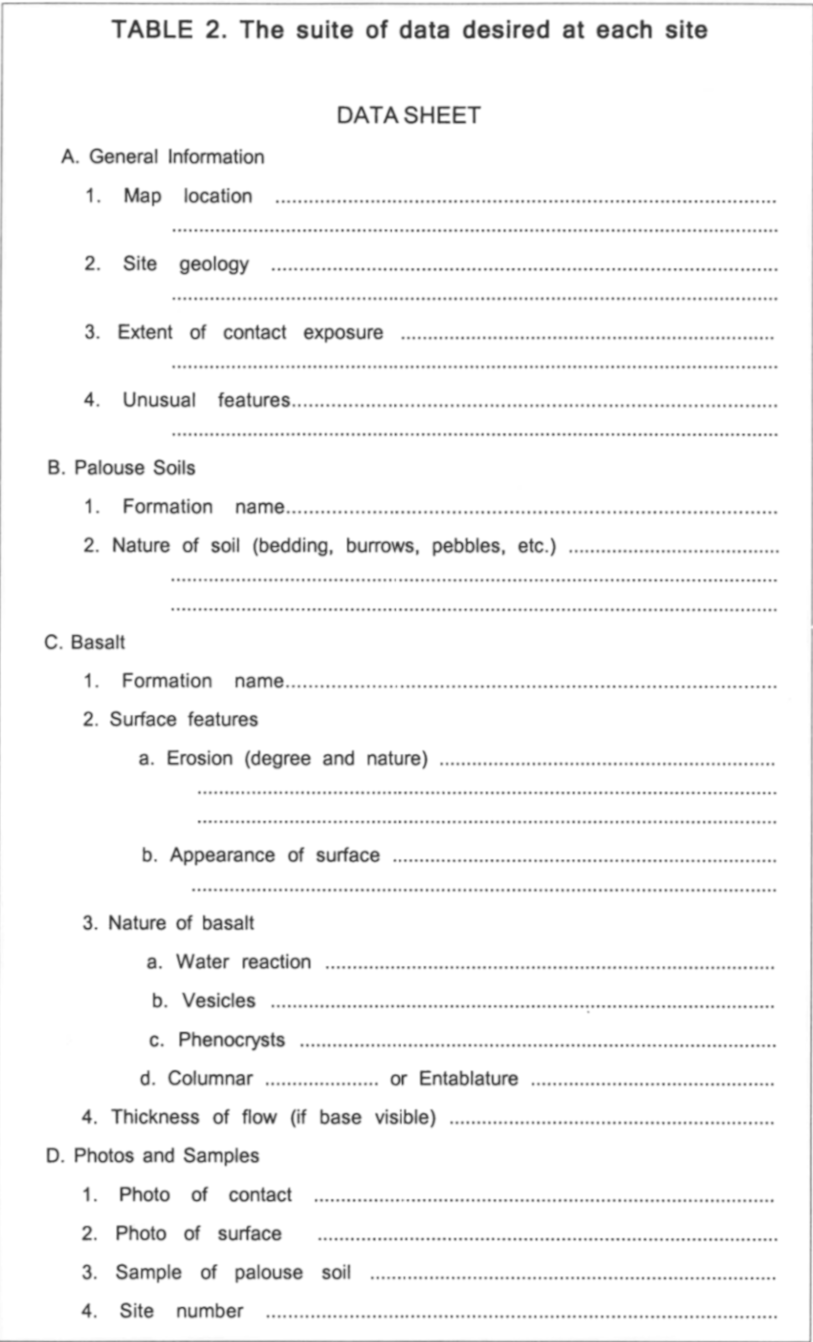 It was originally planned that where possible the surface of the basalt would be excavated for examination. In most cases this was impossible because seldom was the loess above the basalt less than 2 m deep. The amount of excavation to reach the surface of the basalt was impractical. At Site 1 an erosional gully in the loess reached almost to the basalt. Excavation to the basalt surface was achieved. Bulldozing activity or natural erosion at several quarries had removed most of the overlying loess without much disturbance of the underlying basalt. These locations gave opportunity to examine the basalt surface (Figure 2).

Every effort was made to avoid the modern erosion coulees and canyons or those produced by the Missoula Floods, but some quarries had been cut back into the hillside from a stream or river canyon. In such cases it was difficult to determine if the quarry face that ran parallel to the canyon had pushed past the erosion crest of the canyon wall. With one exception, all gully erosion seen at the sites was associated with erosion that was post-loess deposition. The one exception was a road cut in U.S. 12, about 11 km north of Dayton, Washington. The road cut was high on a deep canyon wall, and there was a question as to whether it met the criteria of a suitable site. It had some unique features that will be discussed later.

Fifteen of the 27 sites had sharp contacts exhibiting no or slight erosion (Figures 2-4 illustrate three such sites).

In general, the sharp, straight contact between the basalt and the loess was striking. However, the exposed surfaces of the basalts, where visible, did not have a knife edge of intact basalt, but the surfaces were blanketed with a thin layer of loose, angular basalt rocks usually less than fist size (Figure 5).

Five, perhaps six, sites displayed sheet erosion. This could be determined in two ways. First, where the bottom of the top basalt bed was visible, thinning by erosion could be seen by tracing horizontally along the bed. In some cases, the bed, as seen in cross section in an anticlinal dome, gradually and smoothly feathered laterally on both sides of the anticline, and sometimes the erosion continued cutting down into the lower beds (Figure 6). Second, in cases where the bottom of the top basalt bed was not visible, one could assume that if basalt columns were not at right angles to the top surface of the bed, erosion was the cause, rather than bending or warping of the flow.

Ten sites showed either doming of the basalt, or dipping of the surface. The modern loess topography often matched the doming or slope of the underlying basalt.

Talus from the Pleistocene Missoula Flood erosion and modern erosion and weathering is clearly visible in many areas. No examples of large beds of pre-Pleistocene erosional deposits were seen in the research area. There are, however, large deposits of such material outside the research area. (The Dalles Formation in north central Oregon, the Eagle Creek Formation in the northern Cascade Mountains, and the Ellensburg Formation in south central Washington are massive deposits of conglomerates and breccias. Some of them contain exotic pebbles and boulders from outside the Columbia River Basalt Plateau mixed with volcanic rocks eroded from the Plateau.)

As indicated in Table 1, all samples of loess collected showed broken sponge spicules. The source of the spicules is not known, but they are derived from marine sponges.

Normally the loess is homogenous, but closer examination does show some minor bedding. Occasionally, fist-sized or larger rocks are found free-floating in the loess (Figure 7).

The three issues of greatest interest for this study are the relative lack of gully erosion in the basalt, the cause of the sheet erosion and the origin of the sponge spicules. The questions raised by these observations can be better understood by referring to the following sequence of geological events in the research area:

Considering the length of time normally calculated to have passed between the laying down of the last basalt bed and the depositing of the loess, erosion should have been profound. Although some erosion exists, it is infinitesimal compared to what should be seen. The uneroded surface of the uppermost bed below the loess appears to repeat what we see in the underlying beds as revealed in the walls of the deeper canyons of the area. In the area of Palouse Falls, which is located in the major Cheney-Palouse erosion tract of the Missoula Floods, several valleys were stripped of the overlying loess, but with little or no erosion of the underlying basalt.

Modern small streams, such as seen in the region today, cut V-shaped channels into the basalt, or if large enough, U-shaped channels with vertical walls. The Pleistocene Missoula Flood cut major canyons. What is the explanation for the sheet erosion? The absence of gully erosion superimposed on the sheet erosion suggests that the sheet erosion was not the result of prolonged weathering. Talus slopes or piles of rock debris resulting from pre-Missoula Flood erosion were not seen in the research area. Apparently these sediments were transported elsewhere. Thus the cause and time of the sheet erosion, though insignificant compared to the erosion expected in 14 million years, remains a question for further research.

The presence of sponge spicules in the loess throughout the research area is an enigma (Table 1). Although freshwater sponges are known, the abundance of the observed spicules and their siliceous composition indicates their sources to have been marine sponges. It seems difficult to postulate a marine origin for the loess. To my knowledge, no marine sediments adjacent to the Columbia River Basalts are likely sources for these organic remains.

Examination of the contact between the Miocene Columbia River Basalt and the Pleistocene Palouse loess revealed no gully erosion except for Missoula Flood and modern erosion, both of which were excluded from the study. A thin layer of what appears to be a weathering profile mantles the top of the last basalt flow. Pre-Missoula Flood erosion consisted of a minor amount of smooth, broad sheet erosion, the cause of which has yet to be determined. A lapse of 14 million years between the last lava flow and the deposition of the loess is not supported by the data from this research.

I wish to thank the Geoscience Research Institute for their encouragement and for a grant to cover expenses involved in the research. I also thank Dennis Bokovoy and John Hergenrather who accompanied me on one trip to the plateau and contributed valuable comments.

Reidel SP. 1983. Stratigraphy and petrogenesis of the Grande Ronde Basalt from the deep canyon country of Washington, Oregon, and Idaho. Geological Society of America Bulletin 94:519-542.