WHAT THIS ARTICLE IS ABOUT

Archaeopteryx is considered to be an important example of a missing link between two major classes of animals. It has been subjected to much controversy since its discovery over a century ago. Recently, a group of physicists challenged the authenticity of the plumage of Archaeopteryx. They suggested that feathers were artificially impressed on a thin layer of cement which was applied to the skeleton of a flying reptile. In response to the challenge, paleontologists from the British Museum (Natural History) conducted a series of tests on the holotype of Archaeopteryx. They found no evidence of a cement layer on the fossil. Nevertheless, the history associated with the two best Archaeopteryx fossils leaves some unanswered questions concerning their authenticity.

Since its discovery over a century ago, Archaeopteryx has been a subject of much controversy. Because it exhibits both avian and reptilian characteristics, Archaeopteryx is usually considered an intermediate form, an important example of a missing link.

In 1983 the authenticity of Archaeopteryx's plumage was questioned (Trop 1983). More recently (March-June 1985), the British Journal of Photography (BJP) published a series of four articles which resumed the challenge that Archaeopteryx was a hoax (Watkins et al. 1985a,b,c; Hoyle et al. 1985). Because of the prominence of some of the authors (e.g., Sir Fred Hoyle, a well-known astrophysicist), this accusation received much attention.

Archaeopteryx, the earliest fossil bird, is represented by six fossils  five skeletons and one feather (see Table 1). All were excavated from the Solnhofen limestone (Upper Jurassic) in the vicinity of Eichstatt, Germany. The first skeleton (holotype of Archaeopteryx) was purchased in 1862 by the British Museum (Natural History) (BMNH) and is now known as the London specimen (Figure 1).

The second skeleton, preserved in natural pose with extended wings, was acquired by the Humboldt Museum in 1881 and is designated as the Berlin specimen.

Both skeletons demonstrate indisputable feather impressions of tail and wing plumage. Due to poor feather imprints, the other skeletons were initially unrecognized, and two were misidentified (see Table 1). 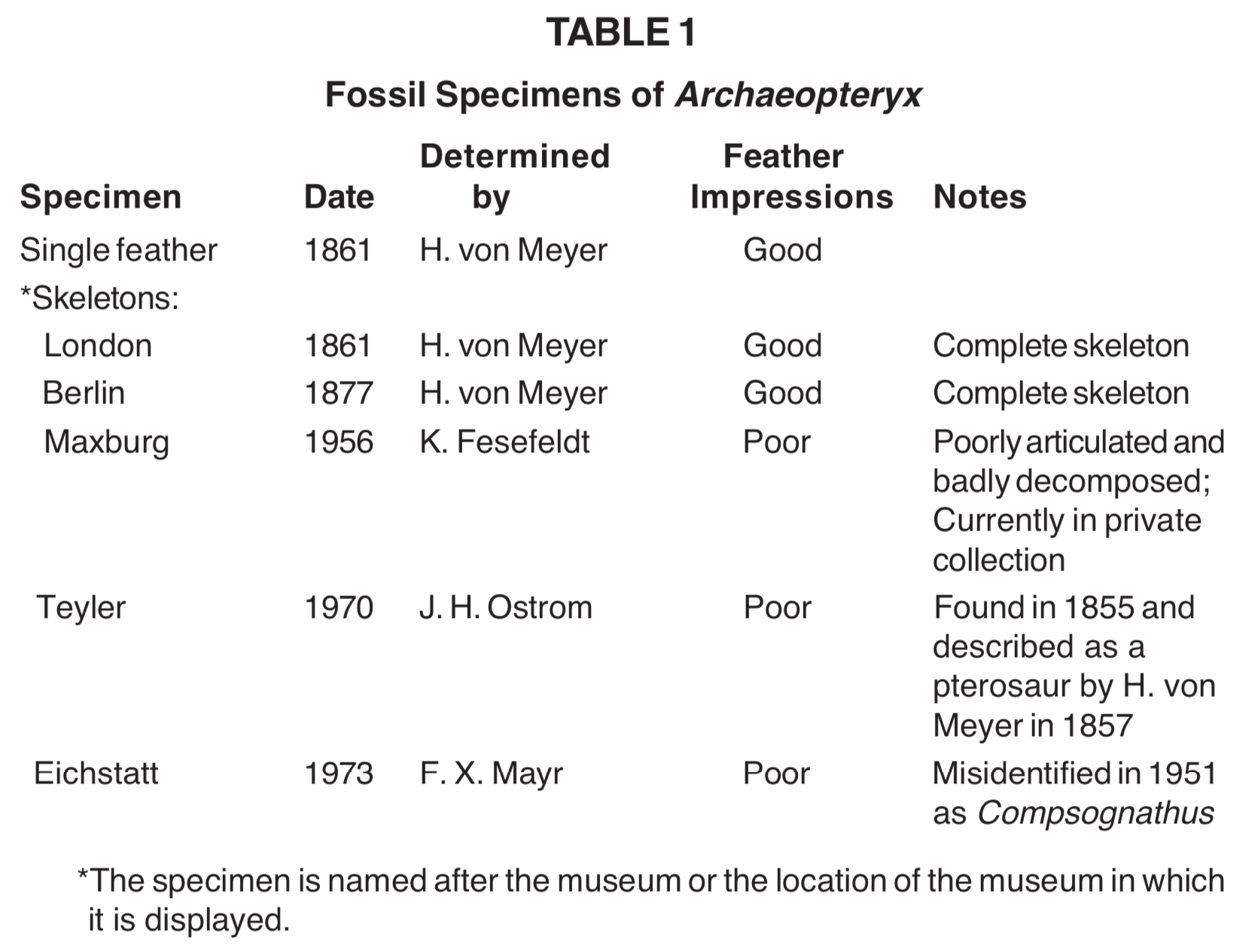 Because of the significance and transitional position of Archaeopteryx, the London specimen is probably the most valuable fossil (Charig 1979). Although the Archaeopteryx skeleton closely resembles that of a small coelurosaurian dinosaur, Compsognathus (Ostrom 1979, Padian 1985), its phylogeny and taxonomic status remain unclear. Padian (1985) argues that the only new avian characteristic of Archaeopteryx is its flight feathers, which are comparable to those of modern flying birds (Feduccia and Tordoff 1979), and that all the skeletal characteristics of Archaeopteryx, including the fused clavicles (furcula), were already present in coelurosaurian dinosaurs. At the 1984 International Archaeopteryx Conference held in Eichstatt, the consensus was that Archaeopteryx was a "bird," but not necessarily the ancestor of modern birds (Dodson 1985, Howgate 1985a).

The discovery of Archaeopteryx coincided with a period of debate triggered by Darwin's recently published The Origin of Species. The appearance of Archaeopteryx rendered support for the arguments of the Darwinian evolutionary theory. Two prominent personalities involved in the controversy were Thomas H. Huxley, Darwin's champion defender, and Sir Richard Owen, an anti-evolutionist and advocate of the church. As superintendent of the British Museum, Owen was instrumental in obtaining the London Archaeopteryx (de Beer 1954, Feduccia 1980).

To test their hypothesis that Archaeopteryx had fraudulent feathers, Watkins et al. (1985a,b,c) and Hoyle et al. (1985), photographed the London specimen. Photographs of feather impressions of the fossil on both the main slab and counterslab were compared. As summarized in Table 2 (tail and right wing) the two slabs do not appear to match (or be "mirror images"). Furthermore, a comparison of the present specimen with an 1863 drawing suggests an alteration has been made to the left wing of the specimen (Table 2). In 1863, the main slab and the counterslab could not have fitted together in this region.

Watkins, Hoyle and their collaborators concluded that the skeletal material of Archaeopteryx is authentic, probably from a flying reptile, but that the feathers were artificially imprinted on the fossil. They suggested the following procedure for creating the feather impressions: 1) the forgers removed rock from around the tail and "wing" (forelimb) regions, 2) they then applied a thin layer of cement, probably made from limestone of the Solnhofen quarries, to the excavated areas, and 3) they impressed feathers on the cement and held them in place by adhesive material (referred to as "chewing gum" blobs). Attempts to remove the blobs from the rock were obvious  the slabs were scraped, brushed and chipped. However, an oversight remained in the cleaning process: one "chewing gum" blob and fragments of others were left behind.

On March 31, Williams (1985) reported a proposal by the BMNH to investigate the possibility of a cement layer on the fossil. Their studies would involve: 1) removal of material from the edge of the fossil for microscopic sedimentation analysis to determine particle size differences between the surface and underlying areas, and 2) examination of the contact zone between surface and underlying material, utilizing electron microprobe analysis to compare the spectra emitted by the material. Further proposals to examine the authenticity of Archaeopteryx were submitted two weeks later by the editor of BJP (Vol. 132, p. 375). These included: 1) direct physical testing of a small feathered region found on the counterslab, 2) carbon-14 dating of a sample of the "chewing gum" blob, and 3) spectrophotometry to analyze the blob for foreign elements at an unbiased laboratory. BJP offered to serve as a neutral observer.

In June, Hoyle et al. (1985) announced that BMNH experiments had been conducted, that the BMNH had determined the London Archaeopteryx to be authentic, and that the fossil was no longer accessible. Unable to test the authenticity of the plumage through direct physical examination of the fossil, Hoyle et al. (1985) explored various events induced by Darwin's introduction of the theory of evolution and the discovery of Archaeopteryx in the fossil record. They speculated that these incidents which hinted of conspiracy would appear inexplicable if the Archaeopteryx fossil were genuine, but logical if the fossil were fraudulent.

Without supporting references, Hoyle et al. (1985) asserted that from the early eighteenth century, the Solnhofen limestone area was notorious for its fossil forgeries and that genuine fossils, altered to form monsters, were sold to museums. After the publication of The Origin of Species, Huxley is said to have predicted the appearance of intermediate forms in the fossil record. Hoyle et al. suggested that this prediction initiated a search for such forms. It also prompted additional fossil forgeries.

Of the six Archaeopteryx fossils, only three specimens demonstrate undeniable feather impressions (see Table 1). Curiously, all three were linked with Hermann von Meyer, who described them within a period of less than two decades. His associates, the Haberlein family, acquired the two best skeletons (with good feather impressions) and sold them at exorbitant prices. Hoyle et al. postulated that Meyer and the Haberleins participated in forging the Archaeopteryx fossils and that Meyer was motivated by desire for distinction whereas the Haberleins were motivated by desire for wealth.

Although Richard Owen, the director of the British Museum, was an opponent of Darwin and Huxley, he expended almost two years of museum funds to acquire the controversial Archaeopteryx. Hoyle et al. proposed that Owen desired to set a trap for his antagonists with a fraudulent fossil.

On the other hand, if Archaeopteryx was a major cornerstone of Darwinian evolution, why was it mentioned only briefly in later editions of The Origin of Species? Hoyle et al. suggested that Darwin did not believe Archaeopteryx to be a true fossil.

In a presidential address to the Geological Society in 1870, Huxley spoke on "Paleontology and the Doctrine of Evolution" without mentioning Archaeopteryx. Hoyle et al. again supposed that Huxley was silent because he knew about the Archaeopteryx fraud.

In the 1860 debate between the church and Huxley, Owen supported Bishop Samuel Wilberforce who lost the debate. The following conjectures from Hoyle et al. were: 1) Owen, filled with spite and paranoia, decided to snare both Darwin and Huxley by Archaeopteryx; 2) Archaeopteryx was a mockery representing an intermediate life form and was compatible to Darwin and Huxley's fancy and theory; 3) Huxley and Darwin, refusing to be trapped, remained silent to save their reputations; 4) Owen maintained his silence because he would have lost his respectability in exposing he fraud, especially since he had purchased the Archaeopteryx fossil.

The BJP papers evoked responses of outrage in defense of Archaeopteryx (Vines 1985, Howgate 1985b). The forgery charge, provoking a debate between physicists and paleontologists and perhaps an additional controversy between evolutionists and creationists, was emphatically denounced. Having suffered a loss of integrity from the Piltdown Man hoax, BMNH scientists could not ignore the charge (Broad 1985, Nield 1985). As a gesture of cooperation, it was suggested that museum paleontologists invite Hoyle and his colleagues to select the test sites (Williams 1985).

Siegfried Rietschel (1985), a taphonomist, also responded to the BJP forgery challenge. He stated that each of the known Archaeopteryx specimens demonstrates outlines of feathers, and that the Maxburg specimen has definite feather structures, complete with rachis and barbs. Rietschel indicated that the feather structures, regarded by BJP authors as feather impressions, are technically casts of feathers and are almost impossible to reproduce artificially.

Recently, Charig et al. (1986) reported BMNH findings on their study of the holotype of Archaeopteryx. A vertical section through the main slab of the fossils reveals no discontinuity between the true limestone and the "supposed layer of cement" which overlies it. In addition, there is no discontinuity around the perimeter of the "cement" (outer layer), and there is a complete absence of air bubbles between the outer layer and the limestone. "Chewing gum" blobs are considered to be natural irregularities of the surface of the limestone, because an organic adhesive substance (such as gum arabic, etc.) would have deteriorated with the passage of time. Ultimately, conclusive evidence of authenticity on the plumage of Archaeopteryx is manifested by matching hairline cracks and dendrites on the feathered regions on both slabs of the fossil (see Figure 1).

Scientific puzzles are not easily deciphered and the argument over Archaeopteryx is yet to be concluded. So the debate continues, and perhaps this intriguing case will never be resolved to everyone's satisfaction.