PLEASE NOTE: Unfortunately, we are unable to reproduce all of the special characters that were present in our printed version. Our apologies for any inconvenience this might cause.

WHAT THIS ARTICLE IS ABOUT

The numerical data of the Septuagint text of the chronogenealogies of Genesis 5 and 11 are considered by some to have priority over that of the Masoretic text. The author outlines some impressive problems with that conclusion.

Although numerical variants are absent in all of the known manuscripts of the Masoretic text for both the antediluvian and postdiluvian periods, this is by no means the case for the Samaritan Pentateuch and the Septuagint, which have only one variant in the former to numerous variants in the latter.

These data have implications for schematization, as well as the choice of a representative manuscript or manuscript tradition as normative. If the Septuagint is to have priority over the Masoretic text, then one set of figures must be chosen as representative. The Codex Alexandrinus has usually been chosen for this purpose, since it is the oldest extant manuscript. However, older is not always necessarily better.

Due to the wide amount of variation in the numerical data, which point to their secondary character, and the obvious attempts at schematization in both the Septuagint and the Samaritan Pentateuch, it would seem that the Masoretic text, which has neither numerical variants or schematization, would be likely to preserve the figures closest to the original.

Is the chronology of the Septuagint text of Genesis 5 and 11 more reliable than other texts? The author examines the numerical variants for an answer.

In a previous article on the chronogenealogies of Genesis 5 and 11 (Hasel 1980, pp. 27-29, 34), our attention was directed to the fact that the numerical data of the Septuagint (LXX) and Samaritan Pentateuch are highly schematic, as opposed to the figures of the Masoretic text. I am in basic agreement with those conclusions, but in addition to the basic data which were pointed out (Hasel 1980, pp. 30-33) [1], I would like to focus more on the numerical variants in these texts (especially the LXX).

II. VARIATIONS IN THE MANUSCRIPTS OF THE LXX

Occasionally it has been argued that the LXX should have priority over the Masoretic text as far as the preservation of the original figures for a biblical chronology is concerned (Hales 1930, Shenkel 1968, Zurcher 1960). However, the adoption of the figures of the LXX has been found inadequate when applied to the chronology of the Hebrew Kings. There it was found that the variants of the LXX resulted because of a failure on the part of the translators to understand the data of the Hebrew text. They, therefore, tried to correct the supposed errors (Thiele 1983, pp. 62, 90-94, 99, 209-210). The figures of the Masoretic text of the Books of Kings were found to be both internally and externally consistent as opposed to those of the LXX.

Unlike the chronology of the First Millennium B.C. which is relatively well known, there are no absolute dates or synchronisms whereby one can test which text preserves the original numbers for the period under discussion. This paucity of information makes it necessary to use such factors as schematization or its lack, and consistency or inconsistency of data as the primary indicators of priority [2]. The former has been dealt with previously (Hasel 1980) and so for the most part does not need to be readdressed.

As far as manuscript evidence concerning the numerical data are concerned, variants are absent in all of the known manuscripts (MSS) of the Masoretic text for both Genesis 5 and 11. Similarly there are no numerical variants for the Genesis 5 genealogy of the Samaritan Pentateuch, and only one for the genealogy of Genesis 11 in verse 15 [3]. In contrast to the above, the Septuagint exhibits a wide variety of variation in the numerical data. While the most widely known manuscript (MS) of the Septuagint (the Vaticanus MS B) is missing for Genesis 1:1 - 46:28, and therefore yields no data here, there are numerous other MSS which prove the point (cf. the following tables). 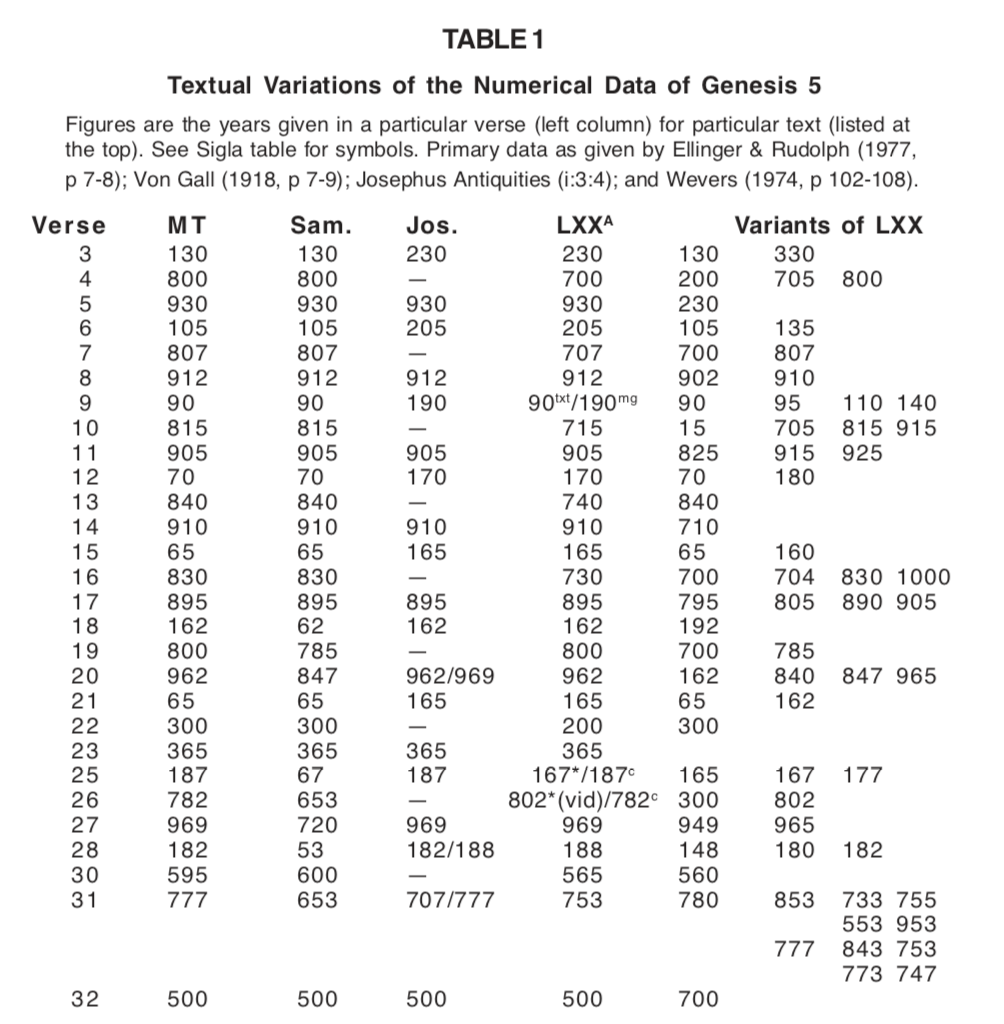 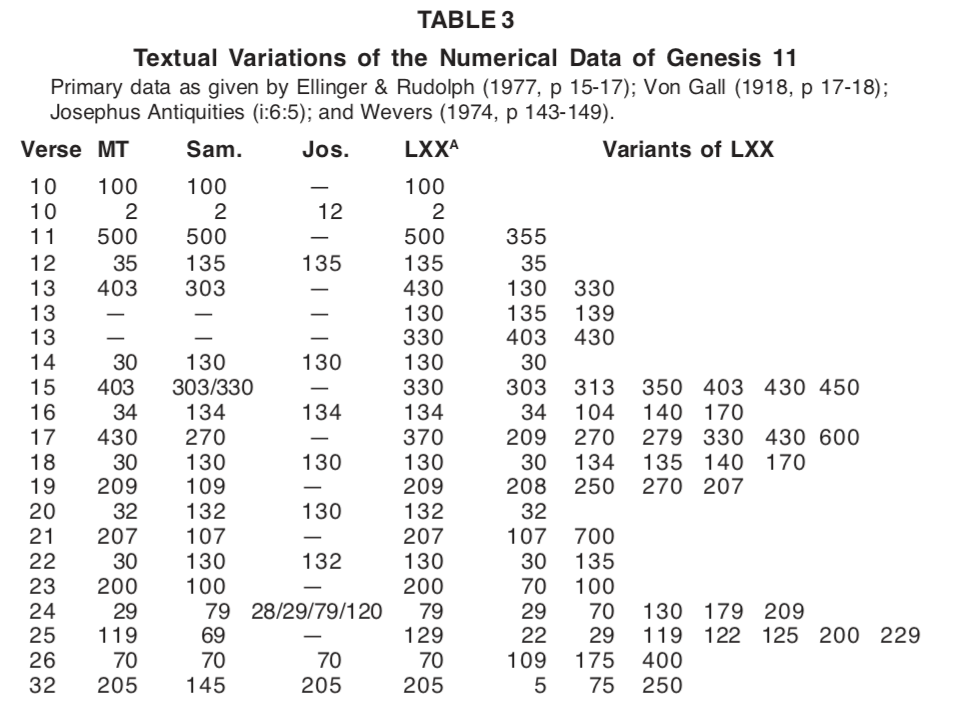 III. IMPLICATIONS OF THE DATA

As can be seen from Tables 1 and 3, there is at least one variation for each verse among the Septuagint MSS, with the two exceptions of Genesis 5:23 and 11:10a. It is interesting to note that with only these two exceptions there is total agreement among all of the authorities cited concerning the age of Enoch when he was translated and the age of Shem when he became the father of Arpachshad. There is not quite total agreement on the birth of Arpachshad occurring two years after the flood.

It can be seen from the above that if the LXX chronology is chosen to have priority over the others, one must decide which LXX MS (or perhaps MS tradition) is to betaken as normative. Of the three major codices (MSS ÀAB), only the Alexandrinus (MS A) is extant for this part of Genesis, and even for it, there are three variations (Genesis 5:9, 25-26, cf. Tables 1 and 2). It has been suggested that the LXX chronology is confirmed by Josephus because his data are nearly the same (Zurcher 1960, p. 60). However, in addition to the arguments against that position (Hasel 1980, pp. 26-27), the question arises as to which MS it confirms. The Alexandrinus comes close, but even if that were the case, an agreement between two sources does not necessarily prove originality. The MSS of Josephus also contain several variants (cf. Tables 1 and 3) of their own.

It has recently been suggested that the Samaritan Pentateuch preserves the oldest account of the figures, at least for the antediluvian period, because the flood date for it and the Book of Jubilees [4] is the same. Further, it is said that in their extant forms, all three ancient sources (MT, LXX and Sam) are schematized, thus leaving the question of priority open (Johns 1984, p. 14). However, the chronology before the flood in the Book of Jubilees has been demonstrated to be based largely on the Samaritan Pentateuch, although certain postflood figures are dependent upon the LXX (cf. Cassuto 1961 in Hasel 1980, pp. 27, 31). It also seems somewhat precarious to base such conclusions on a highly schematized source (the Book of Jubilees) to confirm the data of an earlier text (the Samaritan Pentateuch) to which it was dependent in the first place.

In comparing the texts, it is interesting to note that the Samaritan Pentateuch agrees with the Masoretic text 19 out of 28 times for the antediluvian period (cf. Table 1). Only with Jared, Methuselah and Lamech are the data changed in order to make all three die in the year of the flood. That this was the case seems rather improbable, with the exception of the death of Methuselah whose name might indicate this. In contrast, there is only a 4 out of 19 agreement between the same two texts for the postdiluvian period (cf. Table 3). It is possible that the large difference reflects an attempt to make this genealogy more symmetrical with its counterpart in chapter 5, thus making the deaths of these patriarchs occur in the approximate order of their births, instead of Abraham being partly contemporary with most of his preceding postflood ancestors from Shem on, as in the Masoretic text.

Given such a wide variation in the data of the LXX MSS, it is most instructive to make comparisons between texts while choosing one as representative. The Alexandrinus, the earliest extant MS [5], is usually chosen for this purpose; however, the earliest extant MSS are not always the best or most original. It is true that many times the majority of MSS follow the numerical data given by this early MS. However, this is by no means consistent [6]. Schematization on the part of the LXX is thus multiplied, in that the scribes either misunderstood earlier MSS or, endeavoring to correct what was felt to be erroneous, developed their own. The reason for the original scheme remains unknown [7].

It would appear from the foregoing analysis that the chronogenealogies of Genesis 5 and 11 in both the Septuagint and the Samaritan Pentateuch are inconsistent due to textual variants in the numerical data to one degree or another, as well as various forms of schematization. The wide variation in the LXX MSS, which may also point to a variety of views concerning scheme, appears to mitigate against it as the most popular alternative to the Masoretic chronology which in contrast has no variant readings of the numerical data in all of the known MSS, nor reveals any kind of scheme. It would therefore seem that at present the evidence points to the Masoretic text as preserving the figures closest to the original.

[2]The author is aware that the lack of variants in the Masoretic text and the Samaritan Pentateuch may represent the repression of earlier MSS which deviate from them. This would indicate the possibility that we do not have the original numerical data in any of the extant texts. However, it is felt here that the Texts and MSS which we do possess are primary, and that these ought to be dealt with in their own right, rather than developing a hypothetical set of numbers which may or may not have been in their precursors.

[4]The Book of Jubilees consists of a schematized chronology of 50 Jubilees (i.e., 49 year periods) from Creation to the Exodus which total 2,450 years. It is based on the solar calendar as opposed to the then prevalent lunar calendar.

[5]MS p911 is earlier by a century and a half, but is incomplete and contains many lacunae.

[7]The suggestion that the LXX chronology resulted as a response to the Egyptian chronology of Manetho is inadequate. The modern scheme is dated to about 3000 B.C. However, Manetho's actual figures total 5471 years by dead reckoning, from the First Dynasty to the conquering of Egypt by Alexander the Great, a figure which was assumed as fairly accurate until recently (Gardiner 1961, p. 61).