PUBLIC OPINIONS REGARDING CREATION AND EVOLUTION

A number of polls have been completed by various organizations endeavoring to assess the public's opinion regarding the theories of creation and evolution; specifically, opinions regarding the use of the two-model approach (both creation and evolution) in the schools. Most of these studies show that the vast majority of persons are in favor of teaching both creation and evolution in the schools. A handicap of some of these studies is that they were initiated by creationist groups which had a vested interest in supporting their position. Another handicap is that generally phone surveys are used, biasing the sample towards the middle and upper-middle classes - those people who are more likely to have telephones.

Recently, an extensive scientific public opinion poll was carried out by Gallup, one of the most respected poll corporations [1]. Unfortunately, the poll did not directly assess public opinion regarding the teaching of the two-model approach, although it did attempt to assess whether people believe that "God created the first man and woman," or whether "the first man and woman were descendants of some lower form of primate life." Specifically the poll asked whether the subject agreed with the following statement: "God created Adam and Eve, which was the start of human life" (Table 1). Presumably, this question separates those who believe that Adam and Eve were distinct creations, from those that feel that mankind descended from a so-called lower form of life. 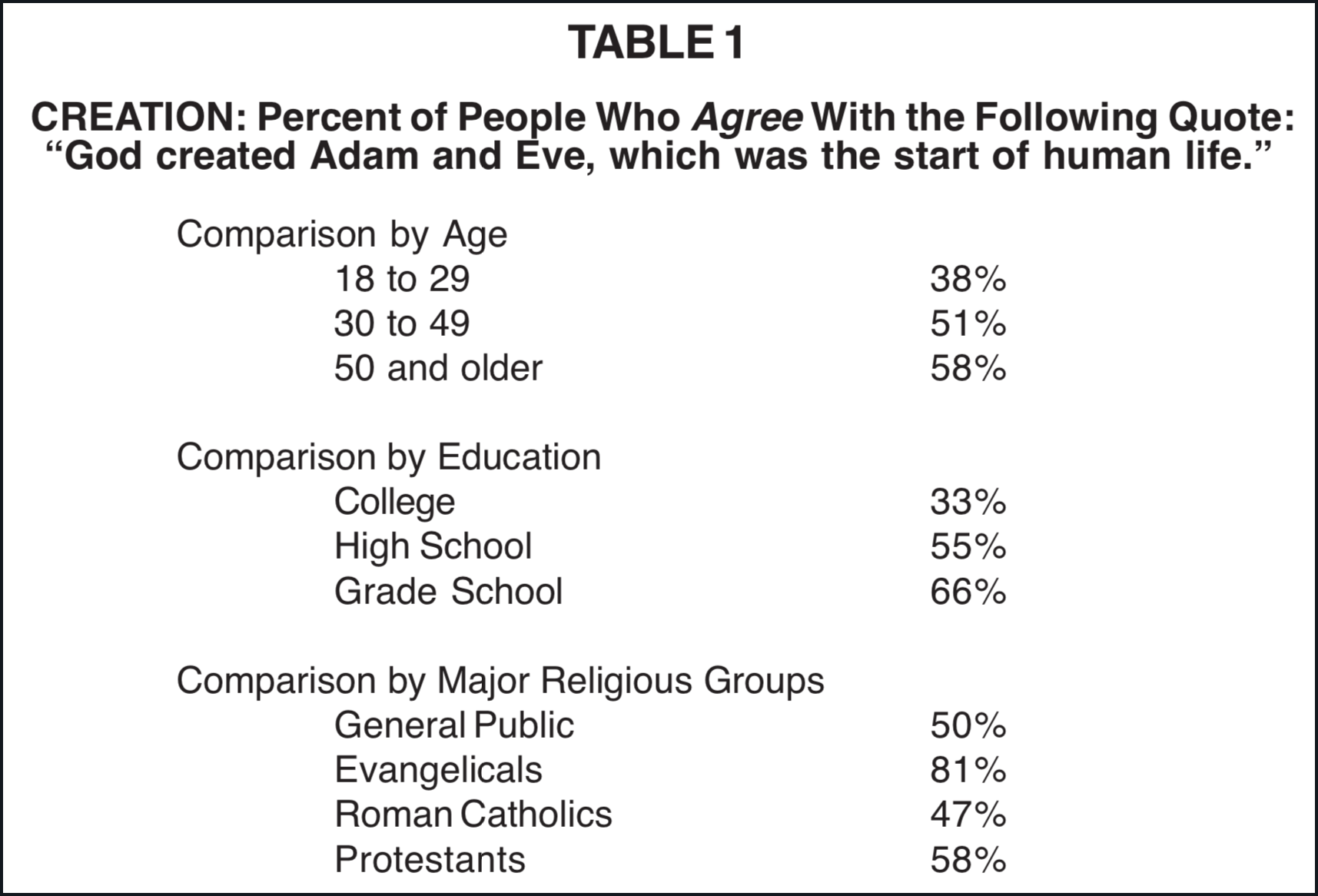 Agreement with the poll statement is inversely related to education the more education one has, the less likely one is to agree with it. Interestingly, the older one is, the more one is likely to agree with the poll statement. These results imply that education may reduce religious values and a belief in creationism. It would follow that the younger persons, because they are, as a whole, better educated than the older persons (and influenced by the society around them), are less likely to believe in creationism. Comparisons by education show a clear difference: 33% of the college graduates agreed with the statement compared to 66% of the grade-school graduates. Nonetheless, as a whole, a significant percent of the population are creationists.

The differences produced by age were not as great as those based on education. Of those in the 18 to 29 age group, 38% agreed with the poll statement compared to 58% of those fifty years of age and older. This supports the contention that the younger people are less religious than the older generation, and because younger people spend more time in school, that education may adversely influence religious beliefs. Such a result would probably be expected, for the textbooks and lectures in secular schools are often negative towards religion and religious values and beliefs. In addition, the social environment of universities tends to be somewhat antagonistic to religion. This indicates that secular schools are successful in reducing the strength of religious beliefs.

Some would argue that acceptance of creationist beliefs decreases with the more intelligence and education one has, because these factors enable one to overcome myths and find out the "truth." This, however, is a judgment that is probably unwarranted. Because schools are admittedly indoctrination institutions, we could conclude that they were successful in indoctrinating those under their care. This would seem to violate the various Supreme Court rulings which state that the schools must not proselytize for religion, but, on the other hand, must not be antagonistic towards religion and religious beliefs. Those who have spent much time in secular universities find them to be, indeed as a whole, antagonistic towards religion and religious beliefs, and much of their antagonism is based on lack of knowledge and an inadequate understanding of history. For example, many people assume that Galileo's discoveries were opposed by the church solely for theological reasons, and the church has been blamed for attempting to suppress knowledge. Though Galileo was formally convicted on religious grounds, he had many supporters within the church, and some of the strongest opposition stemmed from secular philosophical and political motives [2].

On the basis of the above, there seems to be a need for an empirical investigation relative to indoctrination by secular universities. It seems inconsistent that the public would support an institution which openly proselytizes its own belief structure at the expense of the traditional values of society. If the secular schools are to be truly neutral, it would seem that efforts to remove this anti-religious bias should be expanded.